Let’s get Spain v Greece out the of way.  Spain came back and won 2-1 with Guiza setting up the equalizer from de la Red and scoring the winner in the dying minutes.  Spain started a brand new squad with only Iniesta starting from the first team.  They still won.  Xabi Alonso had a great game and almost scored from the middle of the pitch as he did against Newcastle.  As a reward for getting 9 points out of a possible 9, Spain gets to play Italy.  Sweet.  Before everyone goes on to talk about how this is just terrible for Spain, let me say this – sitting here today I think they got lucky by getting this Italian squad instead of the full French team.  Spain will beat Italy… but more on that later in the week.

Russia put on a master class display.  As CH12 had hoped, they moved the ball around brilliantly.  Arshavin was as good as advertised – he never seems hurried and he seems to put the ball wherever he wants to.  I can’t wait for the Russia/Holland quarter final – and Holland, you better watch out because this Russian team (especially with Hiddink in charge) could have CH12 referring to you as the Netherlands again by the time the match is over.

I said the Russians played pretty football.  They do.  I said they would win.  They did.  I said they play sort of total football.  They actually don’t.  What we saw was pretty football that looks like total football.  What they have are players who all seem very comfortable with playing one touch, on the ground, passes, moving off the ball, creating space and making the extra pass (Pavlyuchenko excluded).  It’s unbelievable how calmly they look for, and make, the extra pass in the opposing box.   Sweden is lucky they didn’t concede 4 or 5 goals – two came off the post and Russia missed a couple of breakaways as well.  Hiddink will be doubly pleased that other than a Henrik Larsson header off the crossbar, his defense kept Sweden well in check with Akinfeev looking confident as well.  Man of the match for Russia was Yuri Zhirkov (picture below).  He was brilliant down the left wing and looked like a rich man’s Fabio Grosso.  The one issue that I see is that the Russians seem to zone mark in their own box.  That will get them in trouble if teams avoid high crosses and instead play one twos on the ground against them. 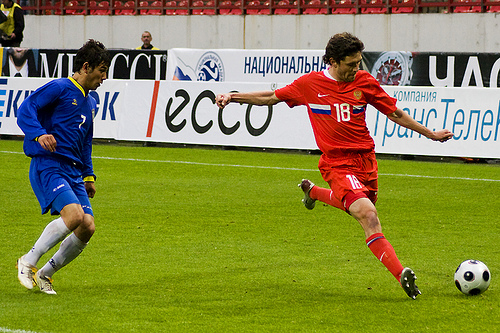 CH12’s crystal ball was working in Group D.  Look out world, because the Russians are coming.  On to the quarters – the predictions slate in now clean.   I still feel quite comfortable with my original prediction of Spain v Portugal in the finals…